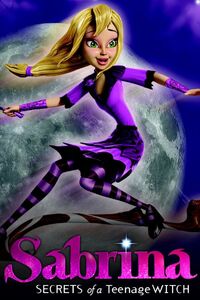 Sabrina: Secrets of a Teenage Witch is a 3D computer-animated American animated television series on Hub Network based on the Archie Comics character Sabrina the Teenage Witch. The series was developed by Pamela Hickey and Dennys McCoy and was acquired by Hub Network on October 1, 2012.[2] The series was originally intended for a summer 2013 release but was pushed out to fall 2013.[1] It premiered on October 12, 2013.

The series tells the story of young blonde-haired teenager named Sabrina. Since she was born half witch and half human, she lives a double life as a normal high school student and the other as a sorceress-in-training in the magical world. Once her two worlds collide, Sabrina is the only one who has the ability to battle her enemies while attempting to maintain her secret identity as a witch from all of the humans around her.

Unlike previous versions, Sabrina is shown to be a witch princess; destined to rule all of the magical world one day as queen. A black cat Salem is a spy sent by Enchantra to make Sabrina's life in the human world hard enough to live in the witch world permanently in order for Enchantra to drain Sabrina of her great magical powers to become the strongest and most powerful sorceress in all of Witch World.

Retrieved from "https://headhuntersholosuite.fandom.com/wiki/Sabrina:_Secrets_of_a_Teenage_Witch?oldid=441603"
Community content is available under CC-BY-SA unless otherwise noted.