This article is a stub. You can help Headhunter's Holosuite Wiki by expanding it.

Under the thumb of the Empire Edit

The search for Han Edit

Lando was consumed with grief over the part he played in the betrayal and subsequent capture of Han Solo. Having earned the trust of Luke, Leia and most importantly, Chewbacca, he set out in the Millennium Falcon on a feverish quest to rescue Han at all costs. Lando and Luke discovered that Boba Fett had a partner named Bossk, whom he had apparently double-crossed. They had hoped that if they could locate Bossk, his anger towards Fett might prompt him to tell them where the bounty hunter had taken Solo. They tracked Bossk and an assassin droid bounty hunter named IG-88 to the Outer Rim world of Stenos. While on Stenos, Lando ran afoul of a dangerous man from his past - Barpotomous Drebble. Lando had conned him out of some money back in his "scoundrel" days and Drebble demanded recompense. He offered a reward of 10,000 credits to any man willing to capture him. Dozens of underworld figures eagerly took Drebble up on his offer and Luke and Lando barely made it out of the densely populated area alive. [1]

The Battle of Carkoon Edit

Once Lando and the others certified that Han had in fact been taken to the palace of Jabba the Hutt, they put together a comprehensive rescue operation strategy. Lando infiltrated Jabba's cartel and assumed the alias Tamtel Skreej. His cover identity was that he was a demolition racer, who piloted a Bantha-II cargo skiff in Jabba's illegal underground demolition circuit. On the day that the rescue operation was to commence, Lando made sure that he was front and center when Leia Organa, disguised as a bounty hunter named Boushh, brought a supposedly captured Chewbacca into Jabba's Palace under the pretense of collecting the bounty. Lando and Leia took note of one another and exchanged glances, signalling each other that the operation was proceding as planned.

Fortunately, Lando was on the desert skiff used to ferry Luke Skywalker, a revived Han Solo and Chewbacca out to the Great Pit of Carkoon, where they were to be fed to the Sarlacc. On Luke's signal, Lando shed his Tamtel Skreej identity and began fighting up against Jabba's men. He grappled with a Kajain'sa'Nikto named Vedain.

On Jabba's sail barge, the Khetanna, another Nikto mounted a blaster cannon onto the side of the ship and fired a shot into the skiff. The impact threw Lando over the side, but he managed to snag onto a length of cable, which only barely kept him out of reach of the Sarlacc's hungry tentacles. The Nikto guard continued firing blasts at the skiff. The vessel lurched forward from the impact, causing the still-dangling Lando Calrissian to drop ever-closer to he Sarlacc. A tentacle reached out and ensnared his leg. Han Solo leaned over the edge of the skiff while Chewbacca was holding his legs and used a discarded rifle to blast the Sarlacc tentacle until it let Lando go. [2]

Hero of the Rebellion Edit 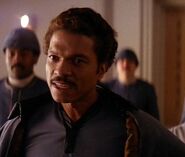 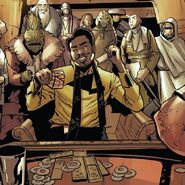 Add a photo to this gallery

Retrieved from "https://headhuntersholosuite.fandom.com/wiki/Lando_Calrissian?oldid=437453"
Community content is available under CC-BY-SA unless otherwise noted.